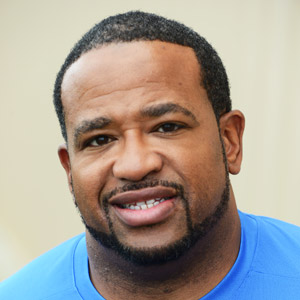 Corey loves to share his knowledge and help others in the fitness industry. He is an international speaker who has presented on a variety of topics at CanFitPro, Idea World, Perform Better, NorCal Fitness Summit, IYCA, and the World Golf Fitness Summit. He is the author of “The Performance Edge: A Guide to Better Golf.”

Corey is a leading authority in athlete development and preparing athletes for the NFL Combine. He created his “Footwork” DVD where he shares his proven movement drills to maximize an athlete’s potential.

Corey Taylor is a graduate of Georgetown College where he earned his bachelor’s degree in Communication and Pre-law. While a member of the football program, Georgetown was the 1999 NAIA National Runner-up, won three conference championships and ended his career 10th all-time single season rushing in program history.

After Georgetown, Corey went on to enjoy a 6 year professional football career playing in NFL Europe and the Arena Football League.

Discovering His Passion For Sports Performance

Corey discovered his passion for sports performance while rehabbing a serious knee injury in Salt Lake City at The Orthopedic Specialty Hospital (TOSH). During that time he was granted the opportunity to work at The Institute for Sports Science and Medicine (ISSM) as a performance coach.

It was there he acquired his extensive insight and knowledge while under the direction of some of the country’s leading exercise physiologists and biomechanists; gaining vast experience training all levels of athletes from amateur to the most elite, including Olympic and professional athletes. After returning to football, he continued his education while working at numerous sports performance facilities around the nation during the off-season.

In 2007 Corey Taylor Sports Performance was founded, a private sports performance training facility with the goal of providing a unique environment where athletes of all ages and levels can develop and maximize all aspects of Sports Performance and fitness through Mind, Body, and Athlete Development.

CTSP is renowned for their NFL Combine Prep program as well as all of their sport-specific training regiments, pushing athletes mentally and physically to reach new heights and develop a winner’s mindset. With his advanced education, professional experience, and extensive background as a competitive athlete, Corey is committed to providing opportunity to athletes of all sports and abilities to maximize their potential.

He has spent several years developing and managing specialized programs for thousands of athletes and works daily to keep abreast on the most current research and information in the field of exercise science and sport performance. Corey is a powerful motivator, strong leader, and a passionate coach who thrives on helping others achieve their goals.